This is what my husband heard from our precious 3 year old son as they passed the massive construction site full of bulldozers and dump truck on the way to school. You see, he was born without fingers on his left hand. No reason, no cause…He was uniquely crafted by a loving Heavenly Father who, I trust, knows so much better than I do in all things, for a purpose that is greater than I can imagine. But in his mind, he only sees that he can’t drive the big trucks.

These few words he spoke have cut me more deeply than any sentence has ever cut me before. This simple sentence spoken innocently by a little man that has unlimited potential cut me because it reminds me of yet another area of brokenness in my life that God desires to bear fruit through.

There have been countless situations in my life that have been “Why, God?” moments. From life-threatening car wrecks and natural disasters where death was miraculously escaped, to the less-visibly life threatening, but equally traumatic emotional wrecks and disasters swept out of sight, bottled up for only a few and God to know about.

We all have our list of moments. We all bear scars, chinks cut out of our heart to mark the memory of a time when it seemed like the promise of “hope and a future” that was made to God’s children in Jeremiah 29:11 was just not meant for us.

We have scars that have shaped our lives in ways we can’t imagine. We’ve spent our lives covering these marks that make us so unique, believing that they mar any beauty we could have contributed to our surroundings. Rather than realizing they are what set us apart from everyone else. They are what brings beauty.

Because a scar represents healing, if you let it. And nothing is more beautiful than healing.

I suppose you could say, “a scar represents the wound” or “a scar is a reminder of the one that caused the wound.” But I say it depends on where you fix your gaze.

In John 9, we read the story of the man that was born blind. He entered the world already broken, according to the the beliefs and standards at that time. He was of no value, except to beg on the street. In fact, the disciples ask in John 9:2 “Rabbi, who sinned, this man or his parents, that he was born blind?”

Jesus’ answer was this “Neither this man nor his parents sinned, but this happened so that the works of God might be displayed in him.” (John 9:3)

He was BORN to bear fruit in broken places.

Jesus then went on to heal the man by spitting in the dirt and making mud, and telling him to go and wash the mud off in the Pool of Siloam. Later in the chapter we read that the man was questioned about his healing by the local religious leaders. He had no clue who healed him, but knew he must have been from God.

He fixed his gaze on Jesus, not the scar. A scar left by the stigma of being born blind. A stigma that caused the religious leaders to throw him out of the synagogue, calling him “steeped in sin at birth” (John 9:34). A scar you might bear, but for a different reason.

Ultimately, he met Jesus. He was able to gaze at the healer, not the disfigurer, and was able to confess his belief in front of others. So, the result was more than just a miraculous restoration of sight, but of healing for his heart and soul, and the ripple effects of this are felt each time we read this testimony. This man is eternally bearing fruit in a broken place.

My precious son doesn’t yet realize his potential. He doesn’t see the ripple effect that he is creating every time he overcomes a challenge or masters another skill that seemed impossible. He doesn’t see how much he is already capable of, he only sees a job he thinks he can’t do because he doesn’t think he is equipped to do it.

He is equipped, he just doesn’t realize the reason he can’t drive the bulldozer is because he hasn’t grown into it yet. But, like the blind man, he must wait for the time “that the works of God might be displayed in him.”

We must all wait. And while you wait, lean into Him.

In the pause, pursue Him. Keep your eyes fixed on Jesus, not your scars.

In time, God will produce a harvest of fruit from your broken places, displaying His Glory to the world around you.

Leaning into Him,
Christina 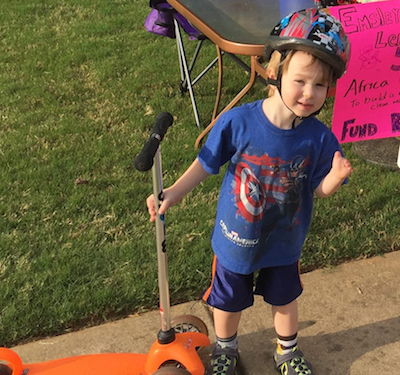